Women Empowerment through Digitisation in Africa 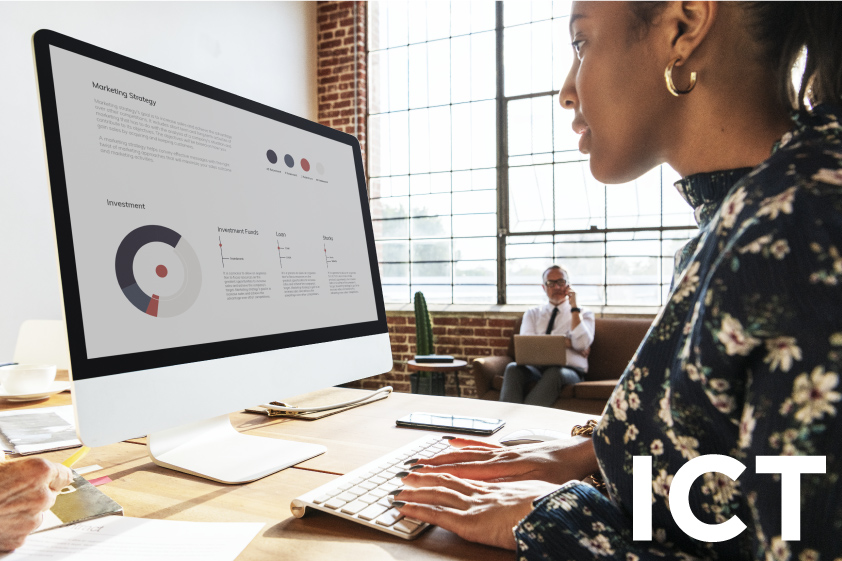 Last year, a paper by McKinsey about the South African work force put it bluntly. In “The future of work in South Africa” researchers predict that industrial automation and digitisation, such as the advancement of robotics, AI and machine learning, will kill jobs and render whole departments slowly obsolete. Until 2030 this could be a loss of potentially 3.3 million jobs that are automatable. But this prospect isn’t as grim as it seems. In the long run, McKinsey estimates, new machines and digital transformation could create up to 4.5 million new jobs in South Africa.A disruptive process no less that requires highly-skilled – or rather re-skilled – workers, and especially a female work force that is given the chance to excel. It is the digitisation that will create opportunities especially for women. Physical – and traditional repetitive – labour is replaced by automation and robots. At the same time, new professions require entirely new skillsets, thus rendering the typical male factory workers obsolete. This implies women would be freed from the traditional physical barriers to take over new jobs that require a greater application of expertise, management skills and development of people, McKinsey suggests.

Digitisation has the potential to finally create more gender equality in the workforce, and unleash women’s economic opportunities for good. Only, what is holding women back today? In order to step up and advance in their careers, women not only need to gain new skillsets and an education that prepares them for the future, McKinsey finds. They have to embrace mobility to be able to constantly switch jobs, and they need constant access to technological capabilities. For the greater flexibility the future jobs require women have to rely on digital and internet technologies today to adapt and gain the essential knowledge.The right tools and a decent internet infrastructure as enablers for empowerment

This development could create hundreds of thousands of jobs for women – and boost female empowerment not only in South Africa but in all Sub-Saharan Africa and South Asia. Technological adoption could elevate the female workforce. Digital and internet technologies are the enablers for women, but to be able to gain access they would first need the right tools, such as computers and a decent internet infrastructure. This infrastructure isn’t that far away. Already in 2018, GSMA reported a 70% 3G and 34% 4G coverage with an average affordability of 1GB which amounted to 6.8% of people’s monthly income in Sub-Saharan Africa back then. This stays in contrast to just 28% online population in all Africa (ITU 2019) and 34% mobile internet subscribers (A4AI/GSMA, 2019). 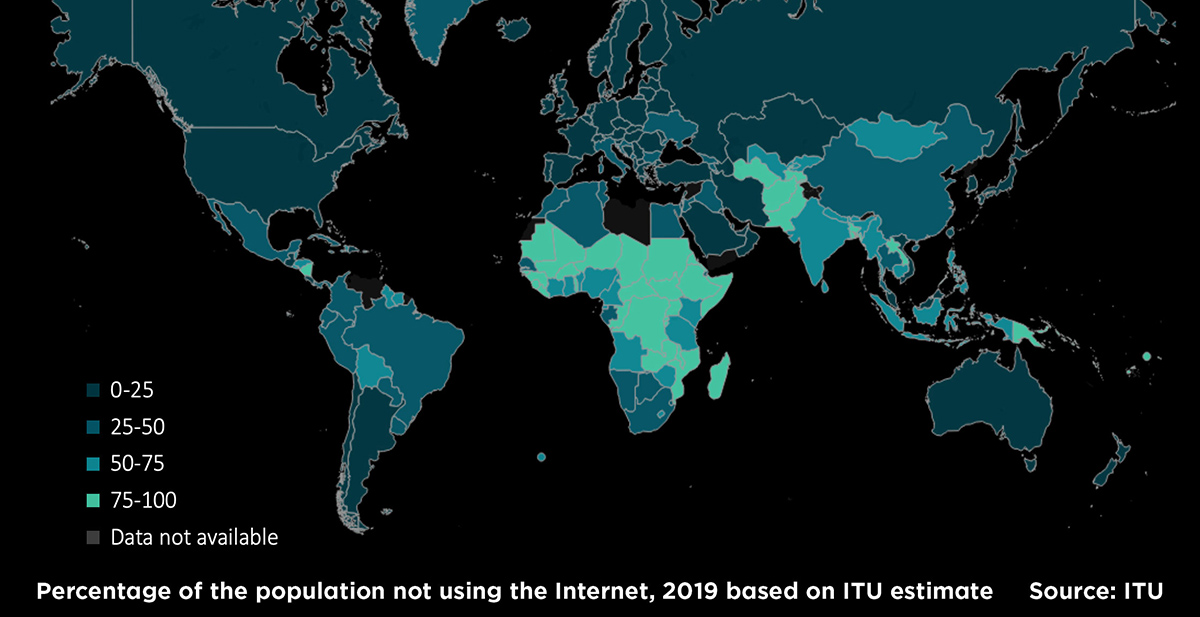 Personal computers and a lack of awareness of their Impact Potential

In spite of the need for the right tools and internet connectivity, African consumers regard them not as high as they should, underestimating grossly the potential of computers and laptops to transform. These are the findings in the “Off-grid market appliance survey” by UK aid in 2018, citing predominantly responses from energy service providers active across Sub-Saharan Africa. The survey compares the rankings of consumer and business demand versus the potential of impact of business and productive use appliances. The  respondents outranked modems, web routers, internet and connectivity equipment fourth before TVs and tablets and laptops in terms of their potential impact. When it comes to consumer demands, tablets and laptops ranked next to last and connectivity equipment last, unfortunately. “As these products are very closely linked in terms of operability, the corresponding rankings underline the importance of internet access overall, alongside energy access to power appliances,” the survey comments.

It is not only the lack of awareness that the future workforce will have to rely on computer tools for productivity and digitisation. The rise of the smartphone in African countries, although as empowering as it is, gives women only half of the productive means for developing digital skills. Advocate Anita Gurumurthy of the Indian NGO IT for Change argues in the “Women and the Web” report that women can’t unlock the empowering benefits of the internet on their mobile phones only. “Women need to participate in a full-fledged way, with the Internet and a computer or laptop, in order to create knowledge,” she stated in the report by intel and advisory firm Dalberg in 2012. Although smartphones indeed have advanced since the report has been released, they are still no substitutes for personal computers for many qualified professions. It is unlikely that this will change especially during the digital transformation and automation of jobs. 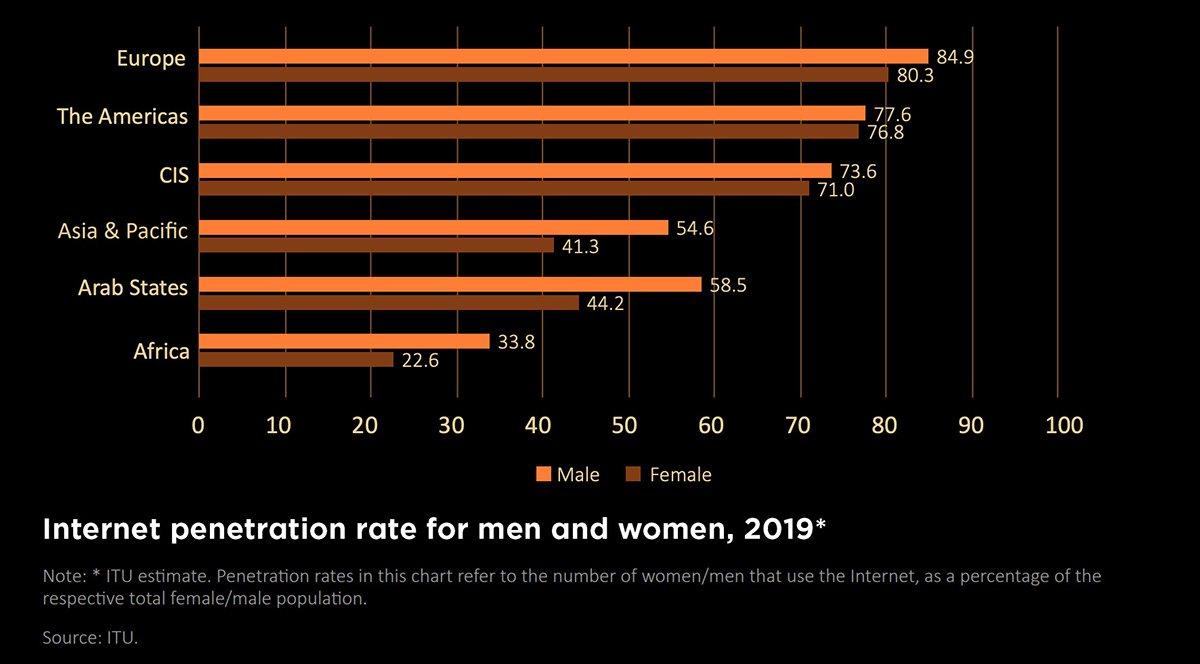 Furthermore, a familiarity with smartphones doesn’t help at all when it comes to using computers or laptops. The latter are tools to enhance digital literacy and education, and it is their absence that needs to be tackled with. The “Women and the Web” study finds, 40% of the women who are not online say the cause is a lack of familiarity or comfort with technology. It continues that “women who are uncomfortable with technology typically lack the exposure to the internet necessary for digital and information literacy, as well as opportunities to learn and practice computer skills.”

Another big obstacle for women is that they can’t afford technology to gain access and get connected in the first place. According to an earlier survey referenced in Women and the Web, in some African countries cost was the main reason for not or hardly being online at all, as 50 to 70% of respondents said. Next to cost it is also the high-power consumption that could drive many away from using more digital tools. However, access to electricity is a precursor to economic development.

A solution to boost digital education for women could be very simple. Make computers or laptops and internet access affordable to all. This can be done if both the technology and its power consumption is kept at bay. The solar computer systems by tech company NIWA delivers exactly this. Their recently launched solar computer systems allow off- and weak-grid female entrepreneurs for the opportunity to learn as well as optimise their work processes using a high-specification, low-energy system. These solar computers give women not only a chance to re-skill. NIWA’s systems can boost female African business owners and entrepreneurs to upgrade their ventures and further professionalise.

Ti el Attar, CEO of NIWA based in Hong Kong, referring to the ‘What is happening in ICT in Kenya’ policy paper from 2012, comments, that “in Kenya, there is a female business ownership of 48.1%, in Ghana 56.5%, in Nigeria 50.1%, and in Botswana it is even 54.4%. This is really outstanding and demonstrates once more that African economies are leaders when it comes to future trends. We believe women empowerment through digital technology will further change the African continent in the long run and build on the great foundation already existing today. NIWA is committed to deliver on this promise.”

Although often, women are held back by discrimination and don’t receive enough encouragement from their local communities. Being connected through internet technologies can help them find online advice and validation from a global community that gives them the respect and support they need to pursue their ventures. Only then they can become change agents at home, as Jensine Larsen of global women’s network and online forum World Pulse describes in the “Women and the Web” report.

Ti el Attar of NIWA adds, that “many in our solar industry still don’t want to realise that African businesses and consumers have the same demands and needs as the rest of the world in order to participate in the global digital economy. A positive change in African and Asian economies is only possible if we seriously address digital literacy. This starts at the education level and goes all through the work force. It requires support and bold action from policymakers to implement comprehensive national plans including free training in computer education, internet access initiatives and targeted subsidies which focus on delivering software, hardware, connectivity, support, and energy as one package. It is even more relevant now in covid times.”

A breakthrough for Digital Inclusion

“It is fascinating what is technologically possible today. Imagine that NIWA’s quad-core solar personal computer with an integrated 24” HD monitor consumes as little power as a 13W CFL light bulb. As a result, our computer can run for up to 12 hours every day, only powered by a relatively small solar panel and battery. Ultimately, this entire solution lowers the cost barrier for low-income households in Africa and Asia. Jointly implemented with microfinancing or pay-as-you-go financing this is a breakthrough for digital inclusion,” Ti El Attar continues.

He predicts that NIWA’s new solar computers will outpace their solar TV system sales in two years from now. In East Africa his company is partnering on setting up e-co-learning and e-co-working centres. NIWA works with telco connectivity providers in Burkina Faso, Cameroon, Sierra Leone and the Central African Republic to offer all-in-one connectivity and hardware and software packages with PAYGO financing. However, this development is not just happening in Africa. Ti el Attar notices the strongest demand for digitisation is coming from Asia and in the Pacific states at the moment.